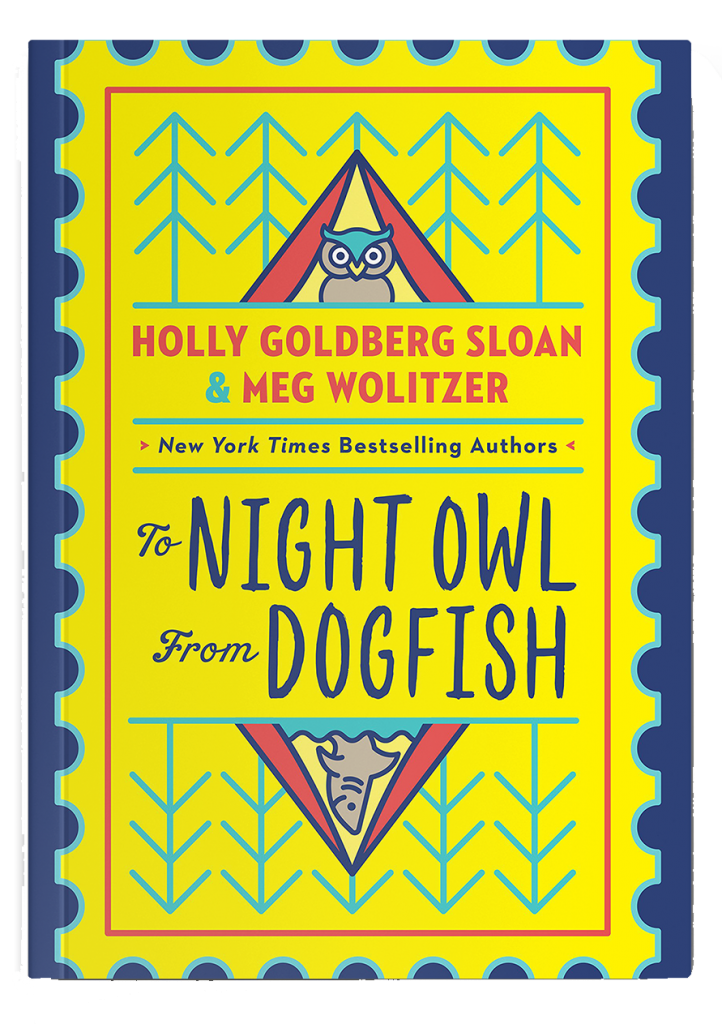 Avery and Bett live in different cities. They like different things. They have opposite personalities.

They have nothing in common. Except…

Avery and Bett both have single dads who have started dating each other. Now their dads want to send them to summer camp. Together.

What could go wrong?

Praise For To Night Owl From Dogfish

“Told in a series of frantic emails and other methods of correspondence, the book chronicles the doomed love story of two men and their canny daughters. Informed by their single dads that they will soon be sisters (despite having never met), the outgoing Bett and the guarded Avery join forces to rend asunder their parents’ romantic plans. When the girls attend a summer camp together and bond, the book takes a right-hand turn toward “Parent Trap” territory. A fraught trip to China wrecks the dads’ relationship, but by then the girls want to force the incompatible couple back together.

Whether or not they’ve watched “The Parent Trap,” young readers who identify with Avery and Bett will want to see their fathers prove that true love conquers all. But a sneaky twist at the novel’s end makes it infinitely clear that sometimes the happiness we claim to want for others is instead a projection of our own wants and needs.

Built on a foundation of absurdity, coincidence and the occasional rather good one-liner, the novel manages the difficult balancing act of using increasingly ridiculous, and often funny, situations to drill home the idea that every close relationship takes hard work, particularly when things start going south. At the same time, the authors attend closely to the perceptions and interpretations of its young characters — so much so that when Avery extols stories told by unreliable narrators (“the person telling you what happened can’t be trusted with the facts and you have to figure it out”), you should pay attention.”

“Written entirely in emails and letters, this laugh-out-loud novel showcases the collaborative skills of bestselling authors Sloan (Short) and Wolitzer (Bellzhar). In addition to the two distraught protagonists, the authors create several other unforgettable characters, including Avery’s estranged biological mother and Bett’s feisty grandmother. Featuring a dramatic climax and a host of surprising twists, the novel affirms that families conventional and unconventional are families just the same.”

“The Parent Trap gets a modern makeover in this entertaining and endearing middle-grade novel about two 12-year-old girls, one camp, and a summer that will bond them for a lifetime.

Avery, an aspiring writer from New York, and Bett, a California surfer girl, are the lights of their respective single father’s lives—and each is very much used to it. So the news that their gay dads fell in love at a conference and have been secretly dating for three months does not sit well with either of them. Worse still, the girls are bundled off to a nerd camp where they are expected to bond like family while their dads head off on an eight-week motorcycle adventure in China. Sloan and Wolitzer make strategic use of their tale’s epistolary (or rather email) format to create two disparate yet familiar-feeling three-dimensional characters who are from very different worlds. That they will eventually become sisters feels inevitable, but that does not diminish the enjoyment of watching Avery and Bett bond over animals at camp, gradually growing toward each other and then with each other. Their increasing closeness is tracked in the evolution of their correspondence, which becomes littered with nicknames and discussions of everything from periods and pet phobias to boys. Bett is African-American and was carried by a Brazilian surrogate, and Avery has both white and Jewish heritages.

A sweet and amusing tale that celebrates diversity while reinforcing the power of love and the importance of family.”

Meet the Characters
Buy the book